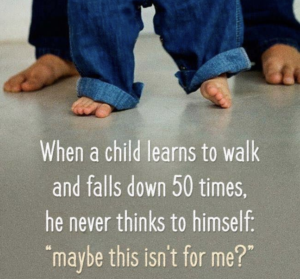 What do you do when you fall down? Do you get right back up or in a short amount of time?

Or do you give up?

When I saw this meme above, I thought about what it’s like when I fall down as an adult. I don’t mean literally, although here in Minnesota with all of the snow and ice, I’m really careful out there!~

I mean when I’m afraid and don’t want to move forward on something.  My fears come from my limiting beliefs.

What about you? Are you aware of some of your limiting beliefs when fear creeps in?

Like the meme says, a child never thinks to himself after falling down when learning to walk, “This isn’t for me”.

I just returned from a very insightful, inspiring learning experience about life and business. Sandra Yancey, the Founder of eWomen Network, led our eWomen Platinum Summit in California.

Here are a few inspiring quotes from Sandra:

“The splats in our life are the bread crumbs that you’re leaving for others to help them find their way.”

“Failure re-framed is success in the making.”

“Confidence is a consequence to courage.”

When I was first introduced to the possibility of hosting retreats in 2014, I immediately went into fear. Never had I considered doing retreats and really thought I wasn’t capable of hosting one. At the time, I was a part of a year long business mastermind group.  The resistance I felt when my group went around the table to each share and dream about hosting a retreat, felt scary.

When it was my turn to share, I said I really don’t know. The wise people at my table said “Come on, you’re a Dream Coach aren’t you? Where do you like to go on this planet?”.

Immediately Hawaii came to my mind. I had been to the different Hawaiian islands and I always felt the pull to not leave.  Since that wasn’t an option, I really wanted to go back there again. It’s such a magical place.  It was as if my heart opened up thinking about Hawaii.

I dreamed about a retreat I would host there in great detail with my group. Speaking out loud all of the details.

After I returned home from this event, I didn’t think about hosting a retreat until 3 months later. The man that owns the spiritual retreat company, Kalewa Kauai, Adrian Nicholas, came into my life via my daughter. (The Universal Law of Attraction).

When I looked at videos of other retreats he helped with, I got that knowing feeling. I got those knowing goosebumps.

I contacted Adrian and set up my first retreat for October of that year, 2015 on the island of Kauai.

After hosting 3 spiritual retreats with Adrian at the same location in Kauai, in cottages right next to the ocean, I have learned so much. My confidence has grown. Just like the quote above says. “Confidence is a consequence of courage”.

I took the courage to move through my limiting beliefs that told me I couldn’t do this.

In fact my instructor in the year long mastermind group told me I needed to wait until the following year, 2016 to host my first retreat. She said I didn’t have enough people following me yet.

Ha! Don’t mess with my intuition, my knowing!

I think after she said that, it gave me more courage to move through and host my first retreat, even though she didn’t think I was capable.

I’m hosting my 4th Spiritual Vacation Retreat in Sedona, Arizona, April 21-26, 2020, among the vortex energy of the red rocks. This time, I don’t  have the help of someone like Adrian. I’m feeling capable of setting up all of the details myself. In fact, it’s over one year away and I only have 1 spot left! Ha!

It has been smooth and easy. I haven’t advertised at all about the Sedona Retreat. It’s in a 6700 sq. foot home at the base of Cathedral Rock in Sedona. It has a built in pool and hot tub, a yoga/mediation room and lots of space for our small group of 11 people.

If you have interest, contact me for the details. I don’t have a landing page to send you to, since it’s filled up so quickly!

The last 2 hours of my eWomen Platinum Summit last week, was very exciting for me. Sandra told us about a “Retreat on retreats”.  It’s in Thailand this November for 10 days!

I’m going of course and I’m very excited to see where my hosting retreats will go when I have lots of new ideas. Stay tuned about this time next year to see what will be next after Sedona!

I had a few minutes of my limiting beliefs coming in as Sandra showed us the power point of the Thailand Retreat on retreats. Then my really wise part of myself showed up with my knowing this was for me. I got up and walked to the back of the room to give them my credit card. There was only space for 14 people they said.

I knew I couldn’t hesitate or I would have lost out. I was right. It filled up shortly thereafter.

If you would like to talk about this topic of limiting beliefs, falling down and getting back up quickly, set up your FREE 30 call with me:

Here’s to getting back up quickly, each time you fall!

PS. Here’s the Emotional Scale to look at often. Being aware of what you’re feeling helps you to shift around what your thoughts and limiting beliefs may be saying! 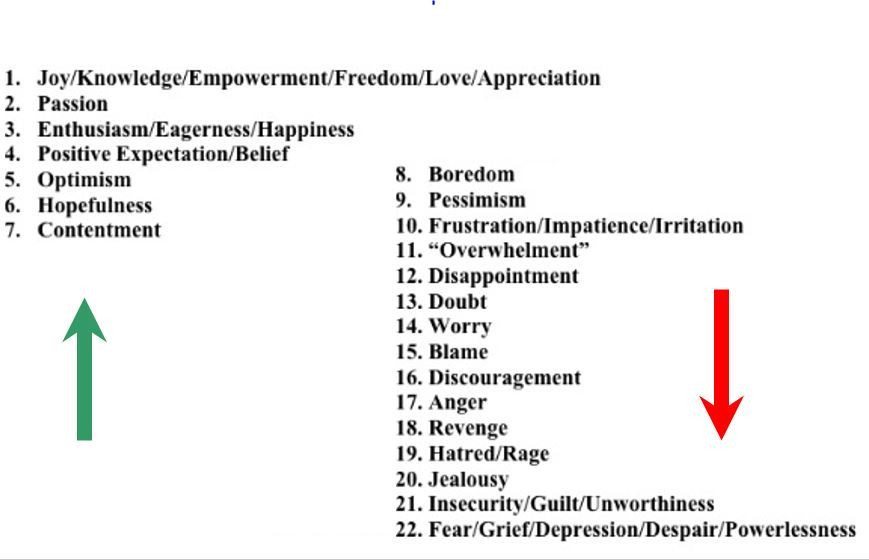